In this exercise we will consider different termination of two polyantryl molecules that are an intermediate step for the formation of a long armchair nanoribbon. 10.1021/ja311099k.

We will show how a simple change in the termination (1 vs. 2 Hydrogens) changes the state structure completely. 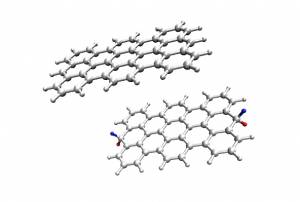 You should run these calculations on 16 nodes with bsub -n 16. Download, as usual, the files from the media manager: exercise_10.2.tar.gz. The 1h.1.5.inp file is commented).

1. Task: Running the job and looking at the orbitals

This time we will not optimize the structure. With an ENERGY run, we run with cp2k the job 1h.1.5.inp and 2h.1.5.inp, meaning that there are here 1.5 units of the original molecule in the gas phase.

The interesting part of the code is in the &PRINT section of &DFT :

There will be an output file with the energy levels and their occupation. The last one can be easily found…

The section &STM shown above produces STM images at different bias (feel free to change), meaning, using the Tersoff-Hamann approximation, it integrates all the density of states with energies between Fermi energy and the Bias potential: this energy interval is involved in the tunnel current. The *STM*cube files are 3D maps of the integrated density of states. Imagine that we have a microscope with a feedback that can keep constant current between tip and sample, by changing the height of the tip on the surface. Since the current is proportional to the density of states, we move the tip on isosurfaces of our cubefile. The program stm ** (in the same working dir) allows to extract a 2D map of the height of a given isosurface.

The resulting .igor files contain the z profile (in bohr) and may for example be plotted by gnuplot:

Where instead of “mystm” you use an appropriate filename.