In this exercise we will compute the UV absorption spectrum of a water molecule, using the quantum chemistry software NWCHEM. The present exercise follows what is already available in the online manual of this open source software: Reference to TDDFT.

First, add the following lines to your .bash_profile file, using an editor (for example, nano ~/.bash_profile)

Then source your profile file, as well as loading the modules, and copying this configuration file:

Now you are able to run the nwchem code.

We first run a calculation using linear response TDDFT. The code computes the ground state, then computes all excitations with their dipole oscillator strength, keeping into account open-shell configurations. We use the hybrid functional PBE0 here. The input file has a simple structure and includes coordinates, basis set specification and level of DFT.

Once the job has started, you can monitor the output file by the command (the file is still not present in your directory):

where jobid is the job number (see bjobs) and is necessary only if you are running more than one job. In the output file ( tddft_h2o_uhf.out ) you can find all orbital energies.

You can also plot the orbitals with vmd. There are lumo.cube and homo.cube files generated previously with the input uhf.nw. To visualize them,

Then, the excitation spectrum can be visualized using

In this second part, we compute the time-dependent electron response to a quasi-monochromatic laser pulse tuned to a particular transition. The spectrum obtained with linear response TDDFT can be also calculated by exciting the system through a laser pulse with a specific polarization along x, y, or z. We will use the results of a calculation described here. The total spectrum (6-31G * */PBE0 gas-phase water) is the same as the one we calculated before. First, we consider the absorption spectrum (computed previously) but plotted for the three polarizations (x,y,z) rather then as a sum. The details are given in the previously cited link. 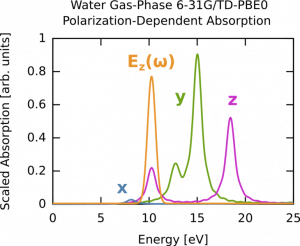 Say we are interested in the excitation near 10 eV. We can clearly see this is a z-polarized transition (green on curve). To selectively excite this we could use a continuous wave E-field, which has a delta-function, i.e., single frequency, bandwidth but since we are doing finite simulations we need a suitable envelope. The broader the envelope in time the narrower the excitation in frequency domain, but of course long simulations become costly so we need to put some thought into the choice of our envelope. In this case the peak of interest is spectrally isolated from other z-polarized peaks, so this is quite straightforward. The procedure is outlined below, and the corresponding frequency extent of the pulse is shown on the absorption figure in orange. Note that it only covers one excitation, i.e., the field selectively excites one mode. The full input deck is h2o_resonant.nw .

The relevant code section is:

The run (follow with bpeek) will apply a field for a limited amount of time. This field will excite the system into a superposition of the ground state and the one excited state, which manifests as monochromatic oscillations. After the field has passed the dipole oscillations continue forever as there is no damping in the system. There are 5000 MD steps. It will take about 10 minutes. At the end, cubefiles for the density at each timestep will be generated. You can visualize the animation using vmd, using a script that cleans a bit (moving the cubes into another directory)

What you will see is the electron density difference between the initial state and an instant along the trajectory.