Here we give some notes on how to use QUANTUM ESPRESSO to perform one of the standard tasks e.g. band structure calculation. In this exercise, we calculate the band structure of graphene along the high-symmetry lines (Γ-M-K-Γ) of the Brillouin zone (BZ). First, we do a self-consistent field (scf) calculation and then 'bands' calculation with a set of k-points (along high-symmetry lines). Please have a look at the end of the input files, scf.in, and bands.in. In general, to study the electronic band structure one must 'relax' the ions in the system (not required for this exercise!) and then do the post-processing.

2. Download all the commented files from the media manager: exercise-12.tar.gz or

The SCF calculation means that the program iteratively updates the orbitals until certain criterion is reached. Inspect the input file “scf.in” for graphene. The most important input parameters in scf.in are: definition of a crystal system, lattice constant, k-grid, and vacuum region to avoid interactions between two graphene sheets. In our case, a vacuum along the perpendicular direction is ~12 Å. The symmetry has been included (ibrav) to reduce the number of calculations.

First column of “graphene.dos” file is the energy and second column is the total DOS. Open plot_dos.plt script to add Fermi energy and save the plot using gnuplot. The DOS should look like this, 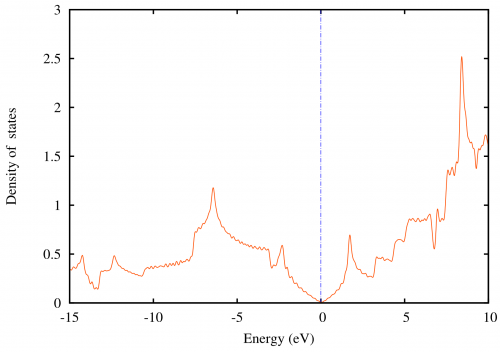 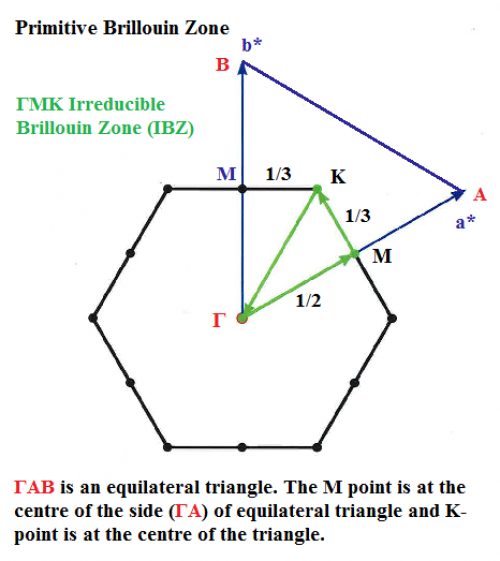 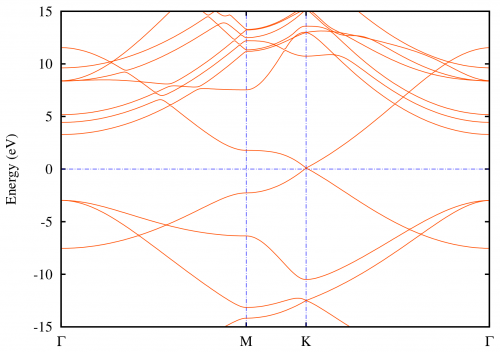