Monte Carlo simulations for the estimation of pair interactions 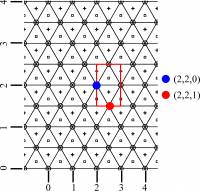 warning To compute the concentration consider that at coverage 0.02, in the simulation, the total number of molecules is 50
TASK2 repeat the simulation using as DE your estimate. What do you get?
TASK3 Repeat the simulation with coverage 0.1 and DE=-0.02 then DE=-0.1 Describe what you obtain. Now try coverage=0.1 T=400 DE=-0.1 Comment the result
TASK4 have a look at the pyhton code, identify the outer loop, mainly responsible of plotting and statistics

and then identify the inner loop where the Monte Carlo moves happen:

To understand these sections you have to refer to the graph of the hexagonal lattice with the convention adopted for the coordinate system. The function “allconnected” is quite intuitive and inefficient. Can you imagine roughly a more efficient function to perform the same task? Just think how you would do the task of identifying, among a set of particles, the ones that are alone, the ones that form an isolated dimer and thr ones that form clusters. Google can help you :) (you do not have to find a solution)
TASK 6 The code, at each step, moves a particle chosen randomly to a new site chosen randomly. Would it be correct to move all particles in a step? what would change?
exercises/2018_ethz_mmm/mc2018.txt · Last modified: 2020/08/21 10:15 (external edit)