Water molecular models are computational techniques that have been developed in order to help discover the structure of water. In this section, you will be asked to calculate some physical properties based on classical molecular dynamics simulation. The TIP3/Fw model will be usded in the simulations.

We have prepared a CP2K input file water.inp for running a MD simulation of liquid water using the force field from the first exercise (parametrized by Praprotnik et al.).

Next we are going to analyze the trajectories in order to calculate the radial distribution function (rdf, $g(r)$) as a function of distance $r$.

TASK 3
The diffusion coefficient is calculated using MSD but NOT RMSD.

We will compute the vibrational spectrum, and dielectric constant of water based on molecular dynamics. The spectra for water are available in this paper https://doi.org/10.1063/1.1884609. The provided program computes the correlation function of the (derivative of) the dipole moment and performs the Fourier transform.

Compile the FORTRAN code, and execute the program 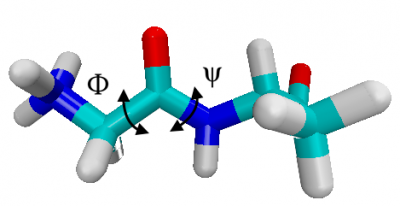 TASK 1 Visualize the structure glyala.pdb with VMD and determine the atomic indices of the atoms defining the dihedral angles.
Note: While VMD starts counting atoms from 0, CP2K starts counting from 1, i.e. the VMD indices need to be increased by 1.