How to run IC-QM/MM simulations for interface systems

The image charge (IC) augmented QM/MM model in CP2K is designed for the simulation of adsorbate-metal systems. The adsorbate is treated by QM whereas the metallic substrate is described by classical force fields, see figure 1. The interactions between metal and adsorbate are described at the MM level of theory accounting for the polarization of metal and adsorbate by an IC approach. The charge distribution $\rho_m$ in the metal is modeled by a set of Gaussian charges (image charges) centered at the metal atoms, 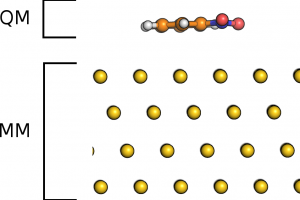 where $\mathbf{R}_\mathrm{a}$ is the position of metal atom $a$ and $g_a$ the spherical Gaussian function located at $a$. The expansion coefficients $c_a$ are unknown and determined in a self-consistent procedure imposing the constant-potential condition within a metal, i.e. the sum of $V_H(\mathbf{r})$ generated by the charge density $\rho(\mathbf{r})$ of the molecule and $V_m(\mathbf{r})$ generated by $\rho_m$ has to be constant within the metal,

\begin{equation} V_{H}(\mathbf{r})+V_m(\mathbf{r})=\int \frac{\rho(\mathbf{r}')+\rho_m(\mathbf{r}')}{|\mathbf{r}'-\mathbf{r}|} d\mathbf{r}'=V_0. \label{eq:const_pot} \end{equation} In this expression $V_0$ is a constant potential that can be different from zero, if an external potential is applied. The implementation is embedded in the Gaussian and plane waves scheme of CP2K and thus naturally suited for periodic systems. Details of the theory and implementation are described in J. Chem. Theory Comput., 9, 5086 (2013).

The IC method is specified in the QMMM section by

The keyword MM_ATOM_LIST defines the list of MM atoms that carrying an image charge. These are typically all metal atoms. EXT_POTENTIAL corresponds to $V_0$ above and is set to 0.0V by default. Note that the QM and MM box must have the same size for an IC-QM/MM calculation.

Additional keywords that can be set in IMAGE_CHARGE are:

WIDTH refers to the width $\alpha$ of the Gaussian $g_a$, which is the only adjustable parameter in our IC model. The energies and gradients do not depend on $\alpha$ for values larger than 3.0 Å$^{-2}$. Small values of $\alpha$ correspond to very broad Gaussians, which will lead to technical artifacts. Extremely large values are not recommended, too.
IMAGE_MATRIX_METHOD determines how the IC matrix $T_{ab}$, Eq. 11 in J. Chem. Theory Comput., 9, 5086 (2013), is calculated. “GPW” corresponds to the algorithm shown in Fig. 1 in J. Chem. Theory Comput., 9, 5086 (2013), whereas “MME” is an integral scheme that has been recently implemented and that is significantly faster.
DETERM_COEFF specifies how the expansion coefficients $c_a$ are determined. With CALC_MATRIX, $T_{ab}$ is calculated and the linear set of equations is solved. ITERATIVE avoids calculation of $T_{ab}$ in each SCF step by using an iterative conjugate gradient scheme. The new integral scheme MME evaluates the matrix $T_{ab}$ very quickly, i.e. the iterative solutions is not required here, thus set always CALC_MATRIX.
RESTART_IMAGE_MATRIX can be used to restart $T_{ab}$ for an MD simulation if ITERATIVE is set.
Note that setting of these additional keywords is typically not required. The default settings are fine.