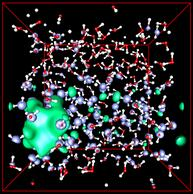 Provide a freely available computer code to perform accurate and efficient DFT calculations on large, complex systems such as e.g. liquids, crystals, proteins and interfaces. Both static property calculations (such as spectra computed with TDDFT or as derivative properties of the total energy) and dynamical properties (e.g. diffusion, based on molecular dynamics) are possible.

Shown on the left is a representation of the lowest unoccupied molecular orbital (LUMO) of a sample 256 water molecules (see also our picture gallery).

Quickstep is a part of CP2K.

The following is an incomplete list of the methods that provide the core of the Quickstep (QS) code. More complete information can be found in the references.

Quickstep is based on the Gaussian and plane waves method (GPW) and its augmented extension (GAPW). Central in this approach is a dual basis of atom centred Gaussian orbitals and plane waves (regular grids). The former is used to represent the wave functions and e.g. the Kohn-Sham matrix, whereas the latter is used to represent the electronic density. The key advantages are:

The orbital transformation (OT) method is a direct minimisation scheme that allows for efficient wave function optimisation. It is, especially for large systems and large basis sets, significantly faster than diagonalisation/DIIS based methods, and is guaranteed to converge. Even though it scales cubically with system size, approx. 1000 atoms (20k-30k basis functions) can be studied fairly easily.

Ab initio molecular dynamics simulations based on the Born-Oppenheimer approach can be performed and are made efficient using a density matrix extrapolation scheme. 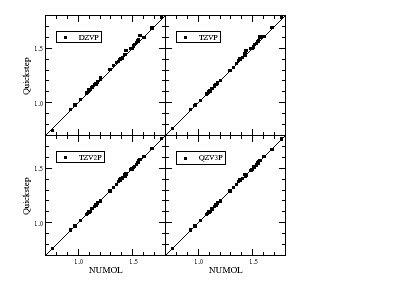 Maintaining good accuracy throughout is an important target, and a sequence of systematically improving basis sets for use with the Goedecker-Teter-Hutter pseudopotentials has been constructed. The picture on the left shows that nearly perfect agreement with a fully converged benchmark method (NUMOL) can be obtained. 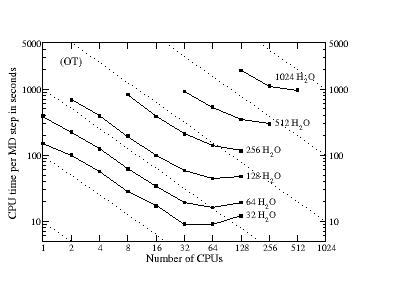 Good efficiency can be obtained both in serial and in parallel on a wide range of architectures, including common desktop PCs. Shown on the left is are benchmark calculations on a Power4+ parallel supercomputer, where the time per MD step is shown for samples of liquid water (PBC) with a TZV2P basis set (a maximum of approx. 40000 basis functions) using high quality convergence settings. The dashed lines indicate ideal scaling. 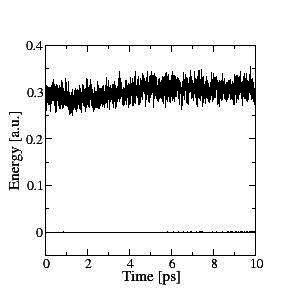 Just nice pictures of systems that have been treated with Quickstep. 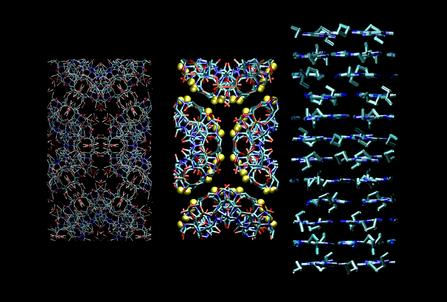 A C540 bucky ball and one of its electronic states. 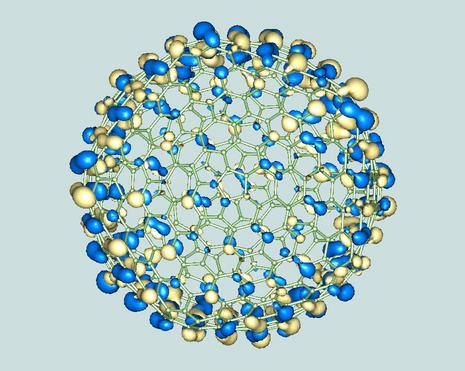